When I set up my new Blog, I wanted a few things:

Tighten Co's Jigsaw gave me a CMS that can build a pretty nice blog from markdown. Then I jumped through a few hoops to get S3 and Cloudfront serving HTTPS on my domain. This was fairly straightforward, but I hadn't done it before, so I followed this guide for help. The guide wasn't perfect, but it got me close enough that I could troubleshoot my way to success.

So that ticked the first two boxes, but what about "git push to publish"? Given that I can build the entire Jigsaw site from a few commands, and updating the site it's a case of syncing the build content to S3 and invalidating CloudFront, this seems like a problem that a Continuous Integration (CI) process can solve. Which is where Bitbucket Pipelines comes into play.

Once Bitbucket Pipelines build the Jigsaw site, we're going to need to upload the content to S3 and invalidate the CloudFront cache. That'll need some kind of AWS API usage, and I don't want to go putting "superuser" credentials into my Pipeline.

So before we go too far, lets create a user in IAM just for this purpose. You could (and probably should) create an IAM policy that grants access to just the required S3 bucket, and only allows invalidation operations on CloudFront. I didn't go quite that far and instead use the existing AmazonS3FullAccess and CloudFrontFullAccess policies provided by AWS.

Create a new user with those policies attached, and generate Access and Secret keys. You'll need these later. 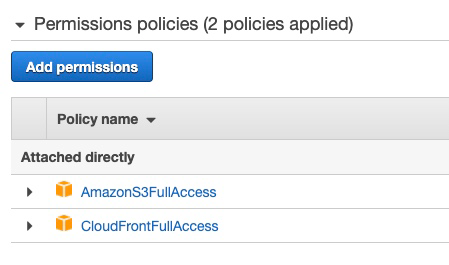 Setting up the Pipeline

Next, we need to create a file in the root directory of the repository called bitbucket-pipelines.yml with the following contents:

There's a lot here, so lets work through it. This build process defines a number of steps that only run on the main branch of the repository. I chose to run the pipeline for main only because I might want to use git branches to store draft posts that I'm not ready to publish yet.

The first step does a composer install to get all the PHP dependencies required by Jigsaw in place. Then the second step uses the node image to install the Javascript dependencies and run the asset build that creates the CSS, etc. Next we run the Jigsaw build itself. If you've used Jigsaw you'll probably recognise these commands as what you would have run on the command line. Along the way we're using Pipelines' caches and artifacts to ensure that the files we've just installed or built aren't thrown away at the end of the build step.

Finally, there's a step that uses two pre-existing pipes to do the S3 deploy, and the CloudFront Invalidate.

With that completed, pushing a new commit to the main branch in the git repo containing your Jigsaw site should kick off a build, and deploy the new site content to S3. If you're seeing this, then it all worked for me!

For me, each build takes around 2 minutes. BitBucket gives you 50 minutes of Pipelines per month for free. So unless I publish a lot, I'm not going to need to pay for Pipelines to keep posting. I've set up Docker containers for my Jigsaw install so that I can run it locally, which is great for previewing posts before pushing to BitBucket. That helps avoid wasting build minutes by allowing me to see the "built" post before it goes through the Pipeline.

So there we have it, a CI pipeline that gives us "push to deploy" functionality for the Jigsaw CMS. I've pushed the last few blog posts through this process, and it "just works". I couldn't be happier with this overall combination.